This cultivar, introduced in 2004, created a significant impact in the woody ornamental world as the first major ‘reblooming’ Hydrangea macrophylla. It was well marketed and publicized, and in just a few years, became the ‘new’ standard for blue hydrangeas and readily accepted and planted by the nursery and landscape trades. The terms rebloomer and remontant became common terms of merit and Hydrangea macrophylla breeding would be changed forever.

‘Discovered’ in St. Paul, MN, Endless Summer – Original™ (aka ‘Bailmer’) was special in that this plant’s flower buds repeatedly survived the rigors of zone 5 winters and flowered regularly the following summers. Close evaluation showed that two conditions were uniquely present. Some stem wood buds survived the winter in traditional fashion and produced blossoms during the normal mid-summer period. But a second mechanism also existed. During winter dormancy, some flower buds were held on yet to develop new growth contained within the plant’s basil crown and below the plant’s ground level. As this new ‘right from the ground’ growth developed (with reasonable spring-summer weather conditions), the terminal buds became blossoms as the summer progressed. Endless Summer – Original™ was thusly heralded as the first H. macrophylla that flowered on ‘old’ and ‘new’ wood.

The following photos illustrate this blooming propensity. On the left we see the typically ‘frightening’ early spring appearance of Endless Summer-Original™ and BloomStruck™ for comparison. The latter is another selection in Bailey’s Endless Summer Series. There is some subtle differences between these two plants, both rebloomers. The Endless Summer-Original™ on the left shows mostly basal growth, relatively little stem bud survival. On the right, BloomStruck™ has far more surviving stem buds, in addition to strong basal growth. 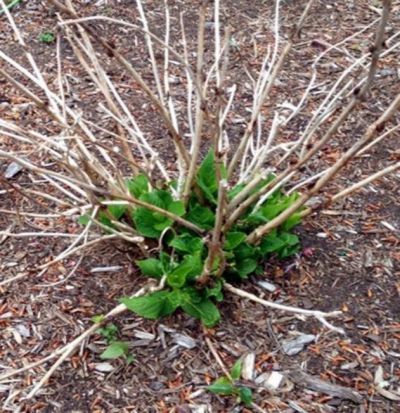 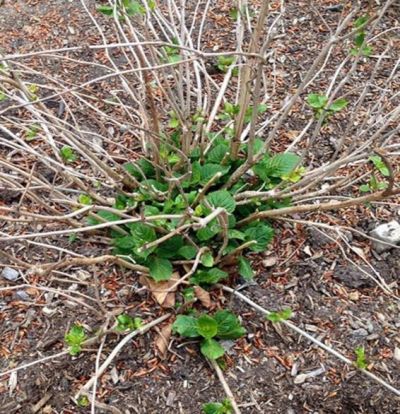 Below we see the same plants 32 days later. The difference in plant growth is much more definitive now; Endless Summer- Original™ growth is decidedly from the basal crown while the survival of stem buds on BloomStruck™ is very obvious and quite substantial. 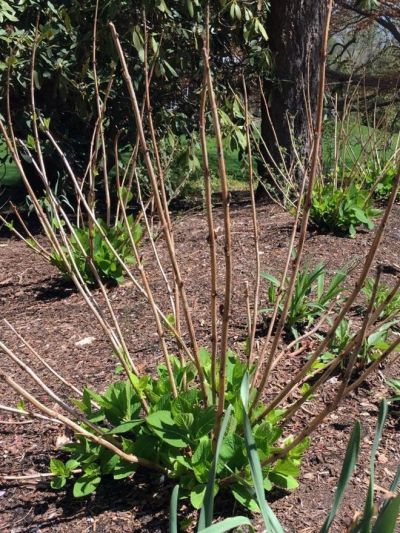 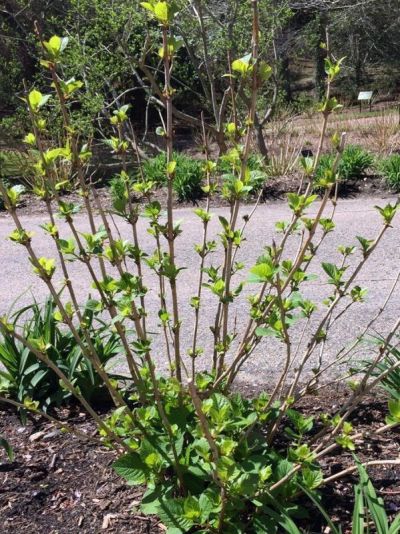 Our first major planting of (11) Endless Summer- Original™ occurred in the summer of 2014 in an area that later became part of the Test Garden. About half the plants were relocated / incorporated into the Test Garden (same general area) during the Garden’s development in the spring of 2016.

Flower development has been generally reliable with Endless Summer – Original™, however, bloom density has been quite variable and often unpredictable. Flowering has improved with in-ground maturity, however, definitive assessments and judgements have often been elusive – difficult to understand and impossible to predict. Overall, this cultivar has been a moderate to strong bloomer numbers-wise with per plant densities of (15) to (40) blossoms. Bloom size is medium to large, 4” to 6”, with good bright pale to medium blue color saturation. The cultivar is easily adjusted from blue to pink via the content of aluminum and the level of soil acidity.

Well grown Endless Summer – Original™ plants – well sited, irrigated, fertilized modestly – do rebloom reliably and at least modestly most summers in the Test Garden. 2019 was our best blooming year to date for the Endless Summer Series and was good overall at Heritage with the truly potent ‘rebloomers’ leading the way, particularly as the summer progressed.

Our ‘Endless Summer’ plantings are about equally dispersed between ‘more sun’ and ‘more shade’ locations. Somewhat more flowers are produced on the ‘more sun’ specimens but the ‘flagging’ (leaf wilting) in the middle of the afternoon is more sustained. This occurrence is common to virtually all cultivars having medium green, matt finish foliage – ie, Nikko Blue’, ‘Penny Mac’, ‘David Ramsey’, ‘All Summer Beauty’, etc. And it is totally sun related; soon after the sun passes and shade arrives, the leaves perk back to normal.

It should be remembered that H. macrophyllas having shiny, dark green foliage – and deeper bloom pigment – are much less prone to this ‘flagging’.

At Heritage, some H. macrophylla cultivars have been troubled by Chili Thrips the past few years. The ‘Thrip Season’ is when it’s hot and dry – typically August and September on Cape Cod. It is cultivar specific (Endless Summer – Original™ has only been minimally affected) and while not fatal, the general appearance of a plant can become quite compromised.

‘Spotting’ for us in 2019 was minor with the exception of a few plants that were badly stressed in terms of inadequate (manual overhead / aerial) irrigation. In general, our observations suggest that strong, vigorous plants, receiving surface irrigation, combat fungal problems quite well. Overall, surface / drip irrigation is paramount to success with hydrangeas.

Endless Summer – Original™ is a medium size plant for us, nominally 4 ft high and wide. Early plantings often exhibited considerable stem drooping or flopping. Pruning this errant wood was corrective but often took a couple of spring prunings to accomplish. Once corrected, the condition did not re-occur.

Pruning potentially offers additional benefits to reblooming cultivars. Early work with mid-summer (July) pinching of non-flowering stems showed an increase in late season bloom development. This is a cultivar specific issue; not all respond in similar fashion. In 2020 at Heritage we will be conducting further pruning trials to more fully evaluate this potential flowering benefit. 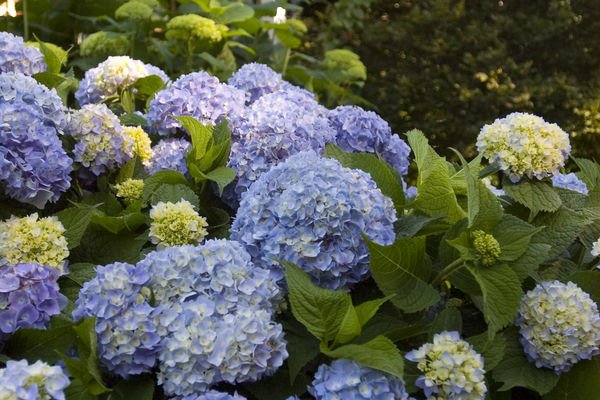 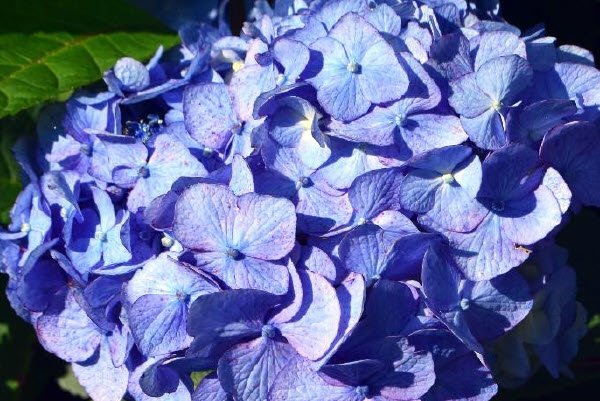 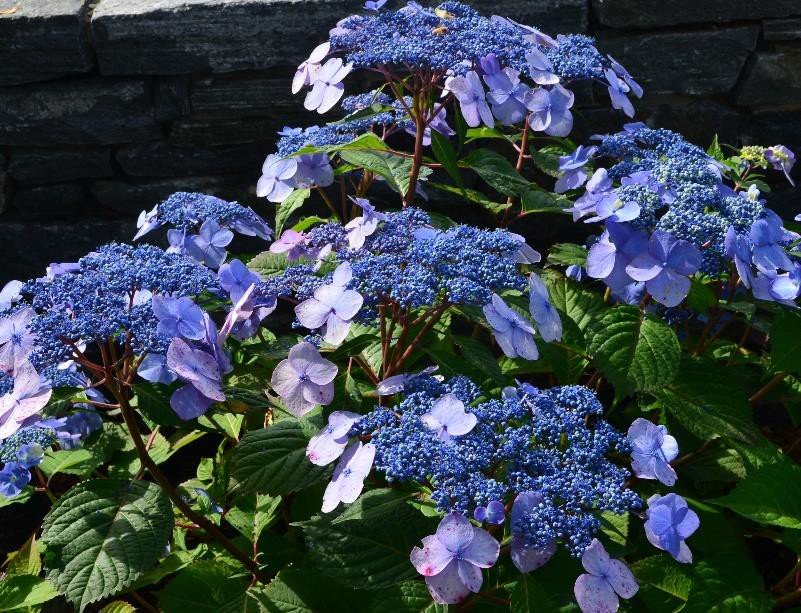 The Trouble with Tomatoes

Down To Earth by Les Lutz What a learning experience this summer has been. Along with many of my friends, I decided to grow vegetables this summer. The most rewarding, and the most [...]

Composition of the Garden: Line, Form, Texture, Color & Mass September 4, 2020 For some reason, vegetable plants have been relegated to the back of the garden. Many of us consider them to [...]

Members welcome at 9AM on Mondays, Wednesdays, Fridays & the first Saturday of the month