SummerCrush™ is Bailey Nurseries’ most recent addition to their ‘Endless Summer Series’ and was a 2019 introduction. It is a more compact plant than its predecessors 2.5 to 3 ft. height and width. Blossoms are comparatively large (5” to 6” width) with a handsome and appealing color range of strawberry pink to a strong violet blue as shown. 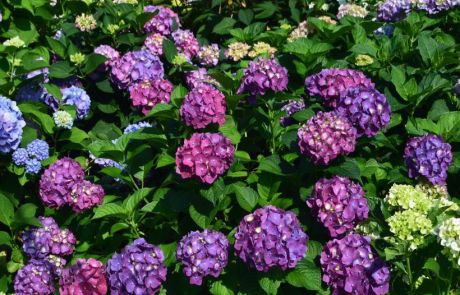 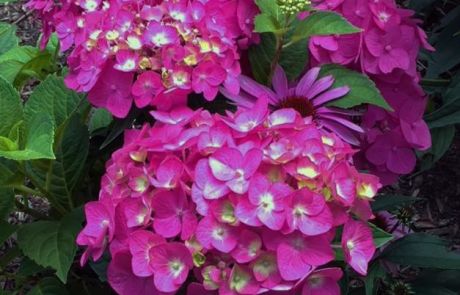 We received several early release Summer Crush™ plants in October, 2017 for comparative assessment. These were nice full plants exhibiting good foliage growth – but being in just one-gallon containers – root mass was modest. They were planted soon after receipt in a very visible and predominantly sunny location. The balance of our autumn weather that year was pleasant and our first killing frost occurred just before Thanksgiving. In ground acclimation prior to dormancy was favorable with moderate air temperatures, slow cooling, and reasonable rainfall right up ‘til Christmas. 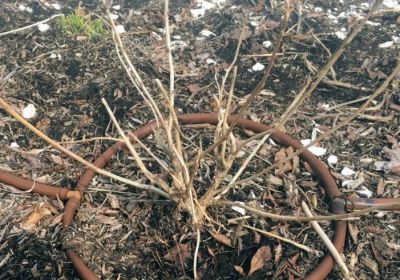 But beginning Christmas evening, severe winter cold arrived with temperatures dropping suddenly to the low teens over much of Cape Cod during the following few days. At Heritage, the morning lows fell further into the low single numbers above and below zero. And there was no snow cover to provide critical insulation. This singular and sudden cold snap, especially following the preceding moderate autumn weather, dealt most of our H. macrophyllas a major ‘hit’ in terms of bud loss . Tip buds were a total failure and stem bud loss was at least 60%. The balance of the winter was more ‘normal’ with short intervals of cold followed by similar periods of moderate weather. However, the damage had been done – and we had another generally poor blooming summer for our H. maccrophyllas at Heritage in 2018.

But Summer Crush™ provided much better results, although that was not apparent when I first observed their winter-over appearance late in March. As can be readily seen on the left, the young plant showed no above ground signs of life whatsoever – no viable stem buds on the seemingly lifeless wood.

All plants from the previous October planting looked alike – total die-back to the ground in like fashion. But a couple of weeks later, now mid- April, some minor new growth was observed and by May 1st, all plants showed very encouraging new basal growth. 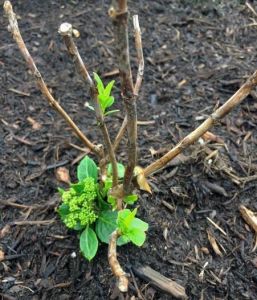 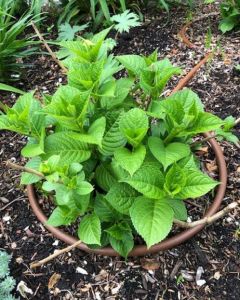 It should be noted that this cultivar was projected to be quite modest in size, attaining just 2 to 2.5 ft in height and width at maturity. Given this stature, any new growth was particularly significant. By mid-June, the first flower buds were observed, only singly on some plants but multiples on several others.

And these buds were born on the new stems emerging from the basal crown. On the right is a close-up of this emerging growth just a month later. Do note the very small inflorescence developing from new basal growth.

This is a powerful attribute; flower buds over-wintering within the plant’s basal crown, just below the surface, and emerging to become the July blossoms. Only a minimal number of stem buds appeared to have survived. All plants showed similar behavior. 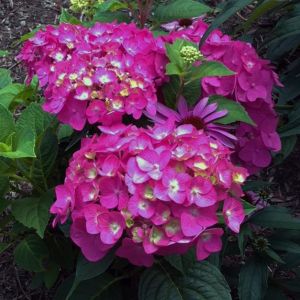 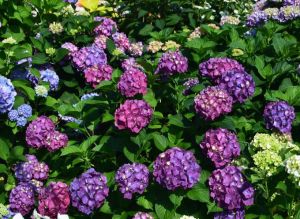 Genetically, Summer Crush™ is an advanced interspecific hybrid created to combine better bloom size and quality with established cold-hardiness and late season blooming potential. As already mentioned, this cultivar succeeds nicely on the first two counts. It should be noted that all evaluation comments are based on just two growing / blooming seasons.

The new blooms pictured (2018) are impressive and quite representative of the (11) plants in this ‘more sun’ location. Bloom size was generous and visually amplified when compared to the modest plant size.

Note also the small, just emerging new bloom. A few flowers developed sporadically over the summer, into September, but no significant ‘flush’ came from new stem growth. With only a very few exceptions, all blossoms came from old wood.

This was 2018. This year (2019) was similar but somewhat less dramatic. Again, blossoms developed only from old wood buds.

Flower development has been good. The blooms are quite lovely – larger (5” to 6”) and nicely vivid in color intensity. Bloom density has been somewhat modest to date – (4) to (10) per plant as the summer progressed. Attractive bloom color tonal differences (shown on the right) suggest future trials with aluminum sulfate addition are warranted to evaluate pigment color and saturation levels. 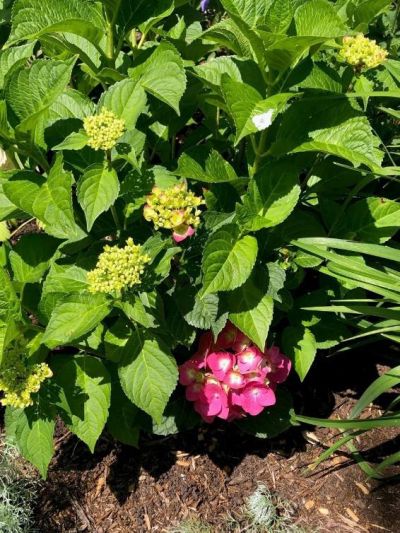 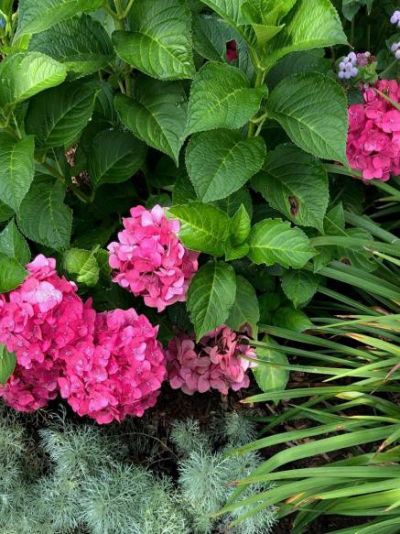 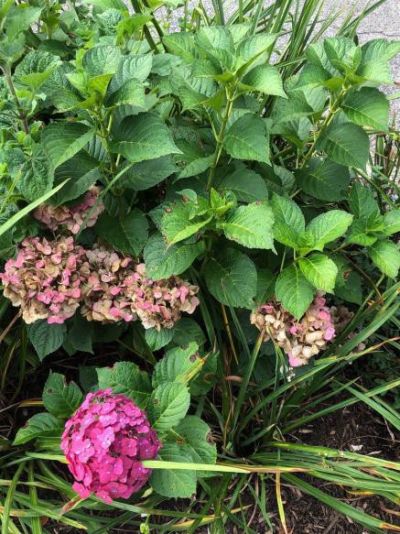 Overall, late season blooming on new wood has not been significant to date, but again, this is based on just two flowering seasons. The above photos, all taken in 2019 and of the same plant, show bloom progression over the major flowering season. July 7, shows a fair number of summer blooms emerging totally from old wood. In the August 10 photo, the blooms are maturing, and this continues into the September 18 photo during our antique bloom period on Cape Cod.

In this specific photo review, the absence of late season bloom development is apparent, but it does not mean that all plants performed similarly that year or from year to year. This is a frequent observation when viewing / evaluating a group of identical cultivars; blooming performance is seldom universal.

No mid-summer pinch-pruning trials have been conducted as yet on Summer Crush™. However, based on the improved response with other rebloomers, this practice will be explored in 2020.

Two growing seasons does not a story make but it appears Summer Crush™ will be the more modest size H. macrophylla as projected. Stem density and branching are good and the general plant form is sturdy, uniform, and naturally rounded. Overall growth appears to be reasonably vigorous. All plants (except for the group of three noted below) have surface (drip) irrigation and receive a single low-volume application of a controlled release fertilizer after early spring pruning.

We have two major plantings of Summer Crush™ in the Test Garden. One receives considerable sun – approx. 6 hours in mid-summer. The other site receives about 2 hours of direct sun and then dappled shade for the balance of the day.
Plant condition and bloom density are comparable in both locations.

In both of the above-mentioned locations, foliage has been typically ‘clean’ and consistently spot-free through the flowering season. The photo on the left illustrates late season leaf spotting. It is minor and typical of normal late season conditions at Heritage – reduced nighttime temperatures and lower daytime humidity.

In a third very sunny and often hot location, the (3) Summer Crush™ plants in this restricted site do show some general stress failing of blooms and leaves. Due to on-going terrain modifications in this specific area, only temporary non-system overhead irrigation has been available. We believe this temporary situation has contributed to the observed level of plant stress.

Other H. macrophylla cultivars in this immediate area, including some not particularly prone to the malady, also showed increased levels of leaf spotting. It is the author’s view that overhead watering can definitely contribute to increased leaf spotting.

Heritage is fortunate to not have any major Cercospera and powdery mildew events. Only very occasional late summer climatic conditions are present to support these diseases. Chilli Thrips are a concern as previously discussed, but their presence to date has not been detected on Summer Crush™.

Members welcome at 9AM on Mondays, Wednesdays, Fridays & the first Saturday of the month