This year, 2021, marks the centennial of the year that Charles Owen Dexter acquired Shawme Farm. It is because Dexter bought himself a country retreat a hundred years ago that today you have a wonderful place to find a smorgasbord of adventures and learning in Sandwich. Have you noticed that sometimes little actions in the past blossom into much bigger things down the line? Let’s look at how that happened.

When Dexter bought Shawme Farm, he was looking for a peaceful place on the Cape where he could live a calmer life and grow blueberries, after a busy life of managing textile factories, and after a diagnosis of a bad heart.  But like a lot of things… it didn’t turn out that way. He hired a garden designer, Paul Frost, who brought in many rhododendrons from a nearby nursery.

Dexter got intrigued by, if not obsessed with a challenge to make a more hardy and more beautiful rhododendron that would grow well in New England and other colder climates, and he got busy making crosses – putting pollen from one plant onto the flower of another – playing at being the bumblebee. And the rest, as they say, is history.  Today you are surrounded by so many different rhododendron hybrids made by Dexter, and also by subsequent flower breeders at Heritage.

Dexter’s creations are planted in many gardens in the United States and Canada, as well as in Europe – showing that he had great success. But like so many geniuses, his success came into fruition more after his death than during his life. 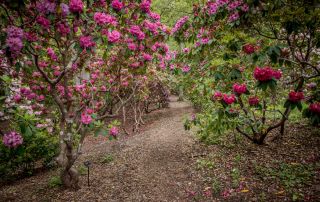 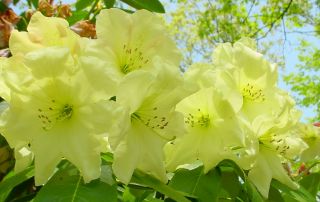 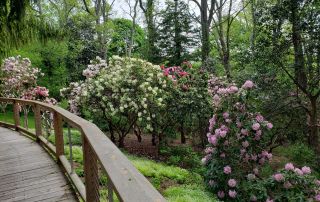 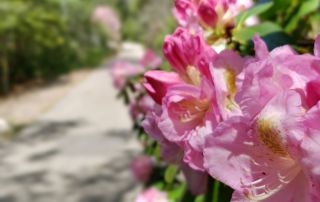 Dexter created tens of thousands of crosses, and each one had to be grown for a few years to find out how they looked and behaved – if they were a good plant, or a so-so one, or even not a good cross. Many of these seedlings he gave to other people to grow up, the beginning of his “offspring” being sent out into the world to seek their fortunes. A few of these were selected and given names – some by him, but mostly by other people after Dexter died. Most of the hybrids fell by the wayside, as they were not judged to be worthy of horticultural attention.

Today there are between 150 and 200 named Dexter hybrids in existence, here and at other gardens in the US.  There are also many more that are still in different botanical gardens and arboreta, but which did not receive names.  There are about 110 of Dexter’s named cultivars growing at Heritage today, and the Garden is working to bring many more back to Sandwich.

Garden plants, such as rhododendrons, are often not native to the place where you find them in a garden – but their ancestors are, or were, native to some place on Earth.  In the case of Dexter’s rhododendrons, most of the numerous species that he used to create his plants originated in the mountains of central and southwestern China, where the rhododendrons originally evolved and where they are most diverse today.

He mixed a few species together, but mostly his exact recipes have been lost to the sands of time. But you can see some of the parent species in the gardens at Heritage.  Look for Rhododendron fortunei, which is seen as the most important contributor to many of Dexter’s hybrids.  Rhododendron decorum is another Chinese species that Dexter used in his work, and which is still growing at Heritage today.

Stop by  May 21st – 30th  to learn more about the history and care of rhododendrons at our Rhododendron Festival.

The Rhododendron Festival is generously sponsored by the Arbella Insurance Foundation.

The biggest bloom of June Tree peonies are the aristocrats of the garden.  I’ve always felt that they’re the pinnacle of gardening and the plant that many gardeners try to grow, and [...]

On Exhibit April - October 2021 This year, we invite you to connect with the history of our region. For more than 12,000 years this region has been inhabited by members of the [...]