After Dexter died in 1943, many of his hybrid rhododendrons were scattered away from Sandwich to different places. While Dexter himself had given away thousands of seedlings during his lifetime, after he died some people who were aware of his fine plants came to buy or to dig up rhododendrons from his estate.  The series of changes in ownership of the Dexter estate from the late 1940’s to the 1960’s led to intermittent periods when rhododendrons dissipated from Shawme Farm.

Happily, for the future of Dexter’s work, there was also a group of people, led by Clement Gray Bowers from Cornell University, and later by John Wister from Swarthmore College,  who recognized how important Dexter’s work had been towards making a hardy, fragrant and beautiful rhododendron. They gathered together a small group of horticulturists who worked diligently to locate where his best hybrids were growing: in which gardens, both public and private were they growing? Who among private collectors had obtained Dexter hybrids?   They found many collections and brought as many hybrids as possible back to Cape Cod.  This effort took almost twenty years, but many of the plants you see in the Dexter Garden today were taken from those grown near Philadelphia, where John Wister based his efforts to collect and evaluate all the Dexters he and others on the committee could find. At Swarthmore College, John Wister managed the Scott Arboretum, and he then moved to Tyler Arboretum, to be the garden director.  The hybrids eventually made their way back to Heritage in the early 1970’s, thanks to the efforts of Heman Howard, then Director of Horticulture at Heritage.

Several large estates were places where Dexter hybrids were located by the Dexter Committee in the 1950’s. The estate of Henry DuPont – now Winterthur Museum, Garden and Library was one of these.  DuPont had known Charles Dexter, and had gotten many seedlings from him – some of which are still alive at Winterthur today, nearly a century later.  Dexter hybrids were also found in a cluster of estates on the northwestern shore of Long Island:  the Coe family at Planting Fields (now Planting Fields State Park), and two members of the Phipps family: John S. Phipps at Westbury House (now Old Westbury Gardens), and his brother Howard Phipps at Erchless (now in private ownership). Two growers, both enthusiastic about the merits of Dexter’s rhododendrons, were responsible for facilitating the plantings at these substantial estate gardens  – John C. Parker and Samuel A. Everitt. These two men were likely the reason for this Dexter hotspot developing on Long Island. Heman Howard was able to take cuttings from these estates in the early 1970’s and bring many back to Sandwich. 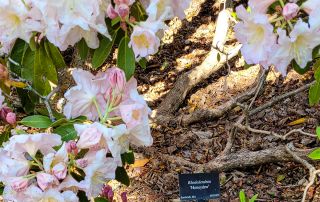 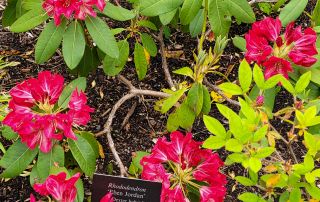 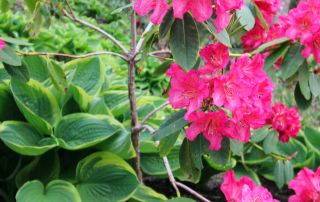 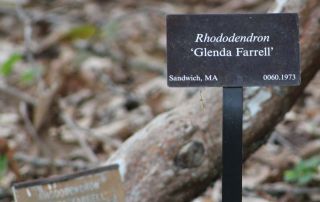 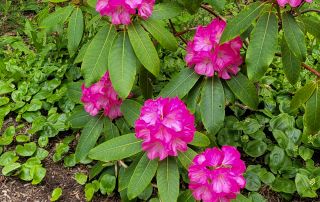 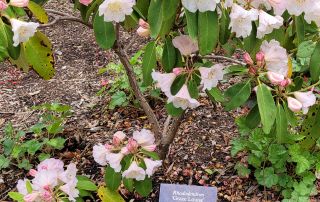 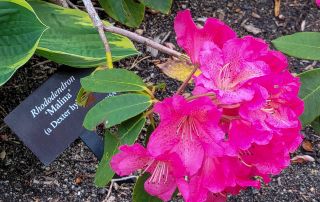 Meanwhile, in the Hudson valley north of New York City, Dr. Henry Ross and his wife, Glenda Farrell, had also maintained a number of fine Dexter hybrids in their garden, thanks to a nurseryman named William Efinger, who maintained the Ross property, and also a local sculptor, Edmond Amateis, who developed a keen interest in them.   Many of these rhododendrons that were selected at the Ross home are among those you see at Heritage today.

Other families that favored Dexters were the Moseleys in Newburyport, Massachusetts and the Bosleys in northern Ohio.  Both of the more northerly locations where these families had gardens that permitted testing of plants for their cold-hardiness.

This is a small slice of the history of Heritage Gardens.  When you walk among the hundreds of grand, enormous rhododendron plants at Heritage Museums and Gardens, seeing walls of pink and red, yellow and cream-colored flowers posed against dark green foliage, you are seeing something that Charles Dexter was never able to experience here, as the plants were still young during his life with them. It took the vision of many people to save these plants from oblivion, and to preserve them for visitors to enjoy for years after their rescue.

The biggest bloom of June Tree peonies are the aristocrats of the garden.  I’ve always felt that they’re the pinnacle of gardening and the plant that many gardeners try to grow, and [...]

On Exhibit April - October 2021 This year, we invite you to connect with the history of our region. For more than 12,000 years this region has been inhabited by members of the [...]